It’s done! Edition three of REFUGE is completed and available on Amazon Kindle as well as in paperback.  It even has a bold new cover that reflects one of the revisions, the shape of the invader’s star-ships.  But that’s only a minor point.  I’ve fleshed out some earlier scenes that tended to be on the lean side, and adjusted the level of graphic malevolence, including less flesh, that brought me some (well-deserved) criticism.  All of this resulted in the arc of the story being altered to accommodate how the revised climax goes down.  It took me a bit of time, lots of effort, and much enjoyment.  But, what the hey, writing is fun!  And because it was so much fun, plus the fact that the original was not my best writing, and because the revision’s effects will carry through to RAVEN and further sequels, I also did a revision of RAVEN, although not so extensively. 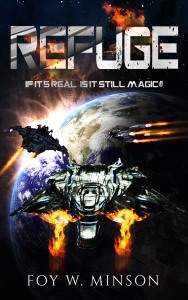 So, if you have read REFUGE and were turned off, give Edition Three a look.  If you haven’t read it, and if you like the genre and the type of story, please–jump right in.  There’s a whole series waiting for you.  RAVEN’s revision, Edition Four, is also now available on Kindle and paperback.  The next sequel, titled WOLFEHAVEN is in the last phases (I hope) and should be out soon.

For those of you who have been wondering where the hell I’ve been, the answer is…right here; although, I’ve been sorta tied up.
I was told a couple of times after my first book, Refuge, came out, that it was a bit…intense. My answer at the time was along the lines of, “Well, it wasn’t written for kids.” But I kept those critiques in mind as I progressed to the sequel, Raven, and then to the other books, and I held the intensity down where I could and still tell the story I wanted to tell.
Well, recently I went back into Refuge for something, and as I was reading through it, I was astounded at the number of typos and errors in flow, composition, word choice, and spots of plain sloppiness and ineptitude that jumped out at me. Actually, I wasn’t so much astounded as embarrassed. Did I really publish this thing? Yeah, I told myself, and I can’t blame anyone else.
So, what I did was put on hold my current, multi-tasking projects, which were the next and subsequent sequels after Raven. I am now in the middle of reviewing, revising, re-editing, and looking forward to soon re-publishing Refuge. It will still not be a kid’s book, but I am backing off a bit on the graphic intensity, even to the extent of altering a major story-line arc or two. It’s still not pablum, but I think it may go down a bit smoother for some. And for the rest of you, if anyone cares to look at the new and improved version, as well as all future readers, I hope I’ve learned enough with the writing I’ve done since first publishing Refuge that this one will be an easier, more satisfying read. I’ve still got a bit to do on it, but it shouldn’t be too long.

Free seems to be a pretty popular word, so I’ll use it.

Well, actually, I should have used only two “FREE”s. They would be for two of my published e-books on Kindle, “WHAT IF” and “AND CRAWLING THINGS LURK”.
Starting tomorrow, April 5, and running through April 9, they will both be free.
Such a deal! Check ’em out.

Modification to prior Imminent release of book

Oops. Seems the release of Wolfehaven is not quite imminent. In fact, it will be delayed for some time. During the time I took to ponder the situation, it occurred to me that I was getting ahead of myself. Actually, ahead of the story-line of Refuge Omnibus. Yeah, I could have gone ahead and skipped six years into the future after the events of Raven, but that would mean missing out on all the things that happen during that period. Then, I would have to either just forget about including those stories or pulling a Star Wars and inserting them later. But I’m not sure that is such a great idea. A lot of folks probably like what Lucas did, but I didn’t so much. Maybe I’m too linear, but I think flash-backs are best when used for the betterment of the story-telling, not to cover the mistakes of the author. Not that George made a mistake by starting his series with number four and inserting one through three later. Maybe he never intended to include what took place in the first three episodes and was talked into it to keep the gold mine in operation. Maybe it was only after getting to the end of the series that he got the idea for what occurred in the times before the original starting point and thought, “What the hell, maybe people won’t notice.”
In any case, I’m not going that route. Not yet, anyway.
So, Wolfehaven has been set aside. It is still a good–no, a great story–but its time has not yet come. Instead, the next installment in the saga of Jason Wolfe’s search for Refuge will pick up where Raven left off. I am well into the story-line, which I won’t divulge at this time, but it is going well. Be aware, also, that I have at least one more pre-Wolfehaven episode to do before I allow those six years to pass undocumented.
My sincere apologies for this screw-up. I was looking forward to it, myself, because Wolfehaven really is a good story. I do hope this little bump in the road won’t cause you readers to abort your journey through Refuge Omnibus.

Yay!  It’s finally here…well closer, anyway. My new novel, WOLFEHAVEN, is completed and about ready to publish. I just ordered a paperback proof, which should be in my hands in the week after Christmas. If I don’t find any problems, I’ll hit the PUBLISH button and it’s a go. I have already gone over it so many times I see it in my sleep, so I don’t expect problems. Of course, you never know, but there you are. It will be available both in paperback and as a Kindle e-book. What’s it about? Well, it’s number three in the Refuge Omnibus series. You know, REFUGE and RAVEN.

The events in REFUGE and RAVEN reduced the remnants of humankind to Stone Age hunters and gatherers combined with scavengers among the bones of what came before. RAVEN ended with Jason Wolfe leading his small convoy of survivors out of Adobe Creek, heading north.  WOLFEHAVEN finds them six years later only a few miles from Adobe Creek where they settled on the north bank of the Russian River a dozen miles from the coast. They named their new home Wolfehaven.

Emmie, accompanied by Raven and Satan on a two or three day wilderness walk-about, uses her special, human-magic to save Sherri and her children from men sent after her by the leader of her village to kill her. Emmie must use more of her magic to not only help transport Sherri and injured Satan back to Wolfehaven for treatment by the village’s healer, Lila, but also to evade a kryl capture mission while en route. Witnessing all these feats that she has been taught can only be wrought by the minions of the Devil, Sherri quakes in fear that her flight has brought her and her children into a land of witches.

After Emmie and Raven and their entourage return to the village and Lila heals Sherri and Satan, Sherri witnesses yet more witchcraft put to more good use when she and the village watch Emmie and several others with telekinetic abilities to install a huge waterwheel in the river to provide electrical power. Afterwards, celebrations are put on hold when two travelers arrive, one black and one white. Seeing a way to avoid identifying the true rapists, Tina says it was these strangers. This results in a trial in which Sherri’s surprising, critical input changes everything.